16.07.2021 - IPMA
The UPFLOW campaign has started onboard of the RV Mário Ruivo with the main objective to obtaining "seismic images" of the interior of the Earth's mantle over a vast geographical area in the North Atlantic, between the Canary Islands and the volcanic islands of the Azores and Madeira.
Share

The research vessel Mário Ruivo left the Base Naval Lisboa on 14 July 2021, taking onboard a multinational scientific team led by Ana Ferreira from University College London (UCL). For over a month, underwater seismometers will be placed at appropriate locations on the bottom of the Atlantic Ocean to obtain an image, with unprecedented precision, of the interior of the Earth’s mantle. The UPFLOW project, received funding from the European Research Council (ERC) of about 2.8 million euros, being a cooperation between UCL and IPMA.

Underwater seismographs detect vibrations caused by earthquakes, and some of these instruments have been developed by teams from several countries, including Portugal. The central objective of UPFLOW project is the development of a new method to obtaining “seismic images”, by incorporating techniques initially proposed by astrophysicists for the study of distant galaxies.

The project researcher coordinator, Ana Ferreira says that “this is a unique experience in the area of seismology. By the first time, a wide geographical area in the North Atlantic will be covered with these high precision instruments. With the collected data, we hope to understand the large movements that occur hundreds of kilometres away in the Earth’s mantle at the bottom of the ocean, particularly, the upward flow of materials that we do not yet have a complete understanding. These upward flows are the ultimate cause of volcanic eruptions and can result in earthquakes.

Ana Ferreira also adds that “the data obtained will leave a very important legacy, opening a vast area of research, from being able to follow the whales’ trajectories through the sounds they make when passing close to the seismometers, to monitoring earthquakes and volcanic tremors. The data can also serve to study the interactions between the atmosphere, the oceans and earth”.
Miguel Miranda, from the project team, said: “The existence of the Canary Islands and the volcanic islands of the Azores and Madeira are the result of massive movements below the Earth’s surface. Our research wants to find out if there is a connection in the formation of these islands”.

Over the next 5 weeks, Ana Ferreira will lead the ongoing expedition, in constant articulation with IPMA’s Research Vessels and Observatories Group (NNIO). During this time, several zoom links will be made with primary schools in the UK, Germany, Portugal, Spain and Ireland. As part of this dissemination and involvement campaign, all the children’s classes of the participating countries suggested names for the seismometers such as: Neptune, Triton, Jelly, Caesar or Thor.

The team will also be recording voice clips and vessel sounds as part of a collaboration with a compositor and jazz artist Liam Noble to create a music inspired by the expedition. 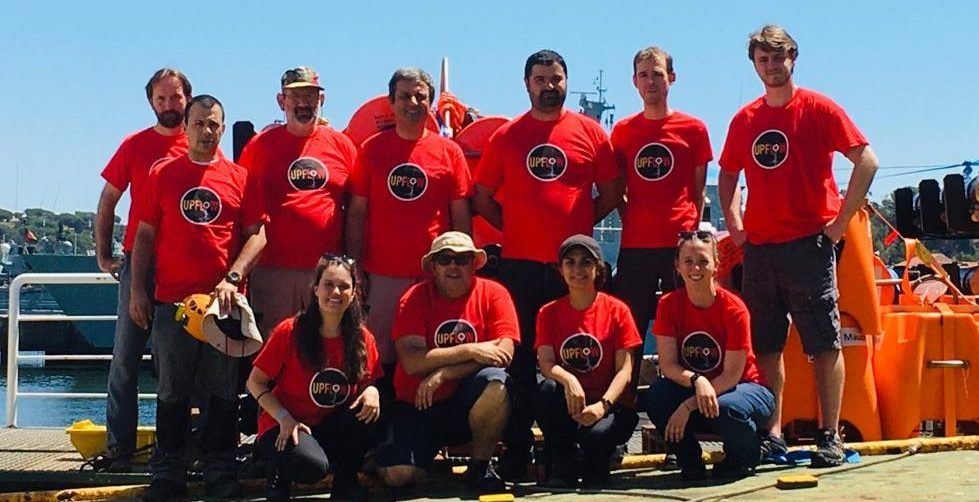 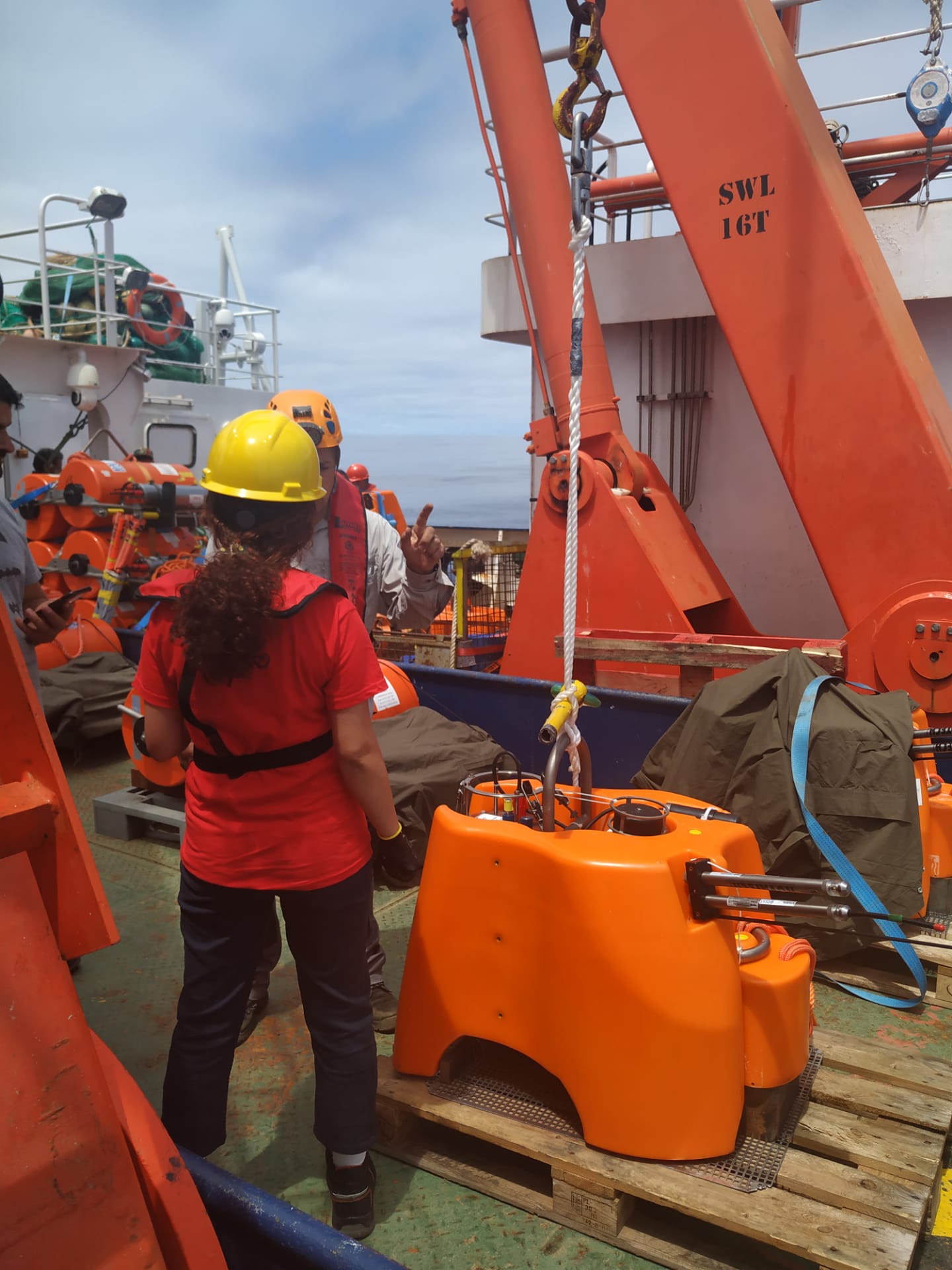 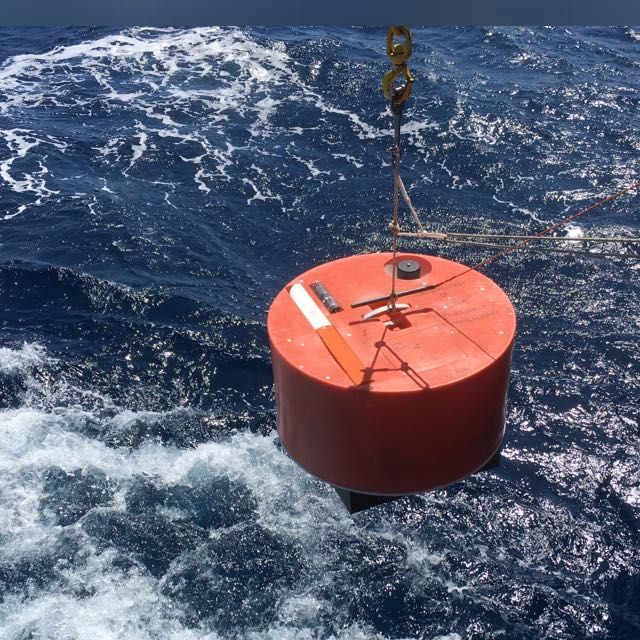 Oceanographic campaign BLUEFORESTS 2022
02.06.2022 - IPMA
The BlueForests 2022 campaign, carried out by IPMA onboard the oceanographic ship Mário Ruivo between the 30th of May and the 2nd of June, aimed to collect sediment cores from the sea bottom to study the coastal ecosystems formed by seaweed, seagrasses and saltmarshes are commonly known as blue forests.
Students from the Naval Engineering and Architecture degree of Instituto Superior Técnico - Lisbon visit the research vessel Mário Ruivo
25.05.2022 - IPMA
RV Mário Ruivo receives the visit of students from the Naval Engineering and Architecture degree in the Instituto Superior Técnico - Lisbon on 24 May 2022.
Oceanographic campaign SAT UHRS 2022-C4G on board RV Diplodus
16.05.2022 - IPMA
The SAT UHRS 2022-C4G campaign’s on board RV Diplodus main aim was to perform the Sea Acceptance Tests (SAT) for the Ultra-High Resolution Seismics (UHRS) equipment acquired in December 2021.